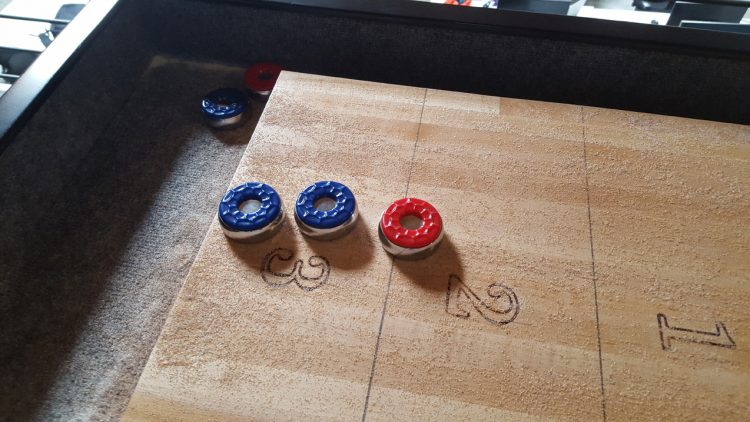 Independent and assisted living facilities across the country offer a wide variety of activities for senior citizens. Exercise, stimulation of the mind and socializing can all be attained with these three activities, listed below. Here’s a look at the best physical games for seniors.

Shuffleboard actually began as a pub activity in England during the 15th century. Centuries later, it remains one of the most popular games around the world. The rules have generally remained the same in shuffleboard. Outdoor and indoor versions may vary a little, but the objective remains the same. One player is victorious when reaching a score of 15. If you wish to play the sport for a longer period of time, a high score of 21 can claim victory. Each player in shuffleboard will take alternating turns, sliding four weights across the board. Whoever ends up with their weights representing the higher score wins. Feel free to knock off opponents’ weights with your own, as this is certainly part of the game. You can also surround your own weights to protect your valuable score.

The biggest benefit of this activity is the constant stimulation of the mind. Relieving stress is an added bonus, along with the obvious workout of several muscle groups during gameplay.

Bocce Ball’s history goes well beyond that of Shuffleboard. Dating back to 5200 B.C., we can see the beginnings of this game. English scientist, Sir Francis Petrial, discovered a painting of children playing Bocce Ball in an ancient Egyptian tomb. And even though a Bocce Olympiad was held in Athens back in 1896, it would take nearly another century for the sport to catch on in the United States. Nowadays, Bocce Ball is a highly popular activity, especially for seniors. Eight balls and a pallino can be split up among 2, 4, 6 or 8 players on a court. One player tosses the pallino, followed by another ball. This player is now “inside” as the closest to the pallino on the court. All players now try to get their own balls closer to the pallino. The closest ball to the pallino gets that player awarded one point at the end of the round. 13 points is the number to achieve for an overall victory.

Bocce Ball gets credited with improving the flexibility of participating seniors. Just like shuffleboard, Bocce Ball can help reduce stress and keep the mind engaged.

Health experts recommend at least 30 minutes of aerobic exercise for all ages, especially senior citizens. Line dancing with a group of your peers is perhaps the best way to hit this goal. This activity is terrific for the heart, and keeps you healthy and in shape, overall. If you aren’t an experienced dancer, have no fear! Line dancing is perfect for beginners with little to no rhythm at this stage.

Stamina, balance and posture should all see improvements when line dancing. The benefits keep getting better as avid line dancing has been shown to lower the risk of diabetes, heart disease, osteoporosis and high blood pressure.

Chaparral Winds Is An Independent Living Facility In Surprise, Arizona

Chaparral Winds is a beautiful independent living facility near Surprise, AZ. Being able to socialize with other residents becomes an integral part of many peoples’ lives and Chaparral Winds Independent Living Facility offers common indoor space to support that need. If a resident requires assistance moving from a bed to a wheelchair or vice versa, this facility has staff who can help.